On Fridays 10 a.m. to 1 p.m. Join us in large format acrylic painting sessions getting in touch which our instinctual side. Moving beyond the Skeleton Woman Story https://anavamicenter.com/transformational-painting/ to the medial partnership.

Marking Session at Studio & on Zoom:
In-Bodying the Field: 6 months of Mark-making from January

We are exploring mark-making as a medium to change how we have learned to perceive reality. Marking in this sense is an exchange, an interaction as marks must be received as well as made, whether on paper, a city road or in a conversation.

The Coddling of the American Mind, by Jonathan Haidt & Greg Lukianoff
This is a book for anyone who is confused by what’s happening on college campuses today, or has children, or is concerned about the growing inability of Americans to live and work and cooperate across party lines.

Fabric of Wholeness: Biological Intelligence and Relational Gravity, Carol Agneessens, through experiential dialogues, draws us into the body to view the pulsating and vital interplay. She concludes that gravity is fundamental to the development of biological intelligence — the glue that holds together and organizes our fabric of wholeness.


https://www.moralimaginations.com, collective imagining to increase radical kinship with the human and more-than-human worlds, present, past and future. 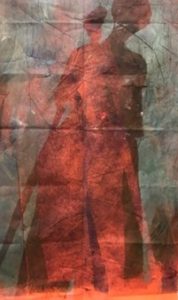 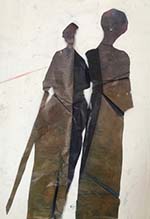 In Anavami Studio we see marking, not only as a foundation of the visual arts but as metaphor and at the same time an appearance of our relationship with the world. We are exploring mark-making as a medium to change how we have learned to perceive reality. Marking in this sense is an exchange, an interaction as marks must be received as well as made, whether on paper, a city road or in a conversation.

Our working definition of mark-making is leaving a residue or impression with movement or pressure. This can be any kind of physical trace, but also a mark can be left on one’s emotions, intellect or psyche. Marks are conduits of information as they are ways of interrelating not in the world but with the world. Our marks are informed by the very matrix in which we live. The greater field is alive, impressing on us as we in turn to press back leaving marks. There is a mutual yielding as well as a mutual learning, as we exchange information. This yielding is more than allowing. It requires an ability to give as well as receive. Just as in traffic sign, yield involves a slowing our trajectory in order to be aware of others movement and speed, which everything in the Universe has. It is a different dynamic to halt at a stop signs where you expect to take turns. The giving and receiving in mark-making as in traffic has consequences. 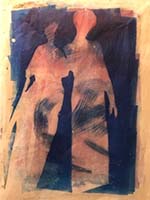 I would also suggest that marks are not flat two-dimensional residue on a surface but more like your shadow stretching before you, deep blue on the asphalt. That shadow fills the space between you and the elongated mark staining the street. It is actually voluminous. When something enters the space between you and the pavement, a cat or fire engine, in the moment it is changed. Their light is disturbed. There is a vulnerability in the distance the shadow travels. There is a life force in that volume, a textural signature of its source. Like the mark it is porous, open to vicissitudes of the time and place. It could even be said to have an intelligence. There is more intelligence around us than we are like to recognize. In times of crisis an extended understanding of intelligence is valuable.

In Hidden Blessings, Psaris talks about life crisis, no matter the age as an opportunity to awaken. She goes on to say that the success of any life-crisis-transformation depends on our ability to allow the soul (ourselves) to evolve beyond the ego structure encasing it. Our ego is not only anthropocentric, judging intelligence and power as human based but also biocentric, projecting that only living things have consequence especially is they are human. 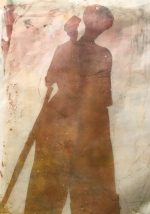 Just as habit does not recognize the volume of a shadow ego is blinded to the psychological function of its shadow, a metaphor and expanded perspectives. At this time in history, our world is in crisis with the need of sweeping new perspective. For most of us the best thing that we can do is tend our own garden, which in actuality calls for persistent courage to redefine our place in the world. Crisis asks for marks of a new order that stretch habits of identification. The ego’s shadow does not see what it is projecting on others without careful scrutiny. In shadow work we see how anything that riles us has much more to do with ourselves than the other. We can only see, literally and figuratively, the fullness of our shadow through imagination.

To tweak those perception that are so ingrained we need to cultivate the imaginal domain. It is much more a part of our life than we acknowledge. Dream worker, Jeremy Taylor described that space between conscious and unconscious as not-yet-speech-ripe. We know but it takes imagination to bring it to consciousness. The more that we call on the space between knowing and not knowing the more that it is available. In this province, as witnessed in any craft that reaches artistry, fundamental truths brought to vision. Marking is more than the flatness of streaks and strokes on a page. There is a qualitative difference between a shopping list or a poem.. And yet there are poems that are really shopping lists and shopping lists that are poem depending on how the imaginal is sparked.

Not imagination but the imaginal realm stretches our senses. In synesthesia, a neurological condition, information meant to stimulate one senses instead stimulates a different one altogether or several —music is seen in colors, architecture has a taste, or sound appears as shapes. We all have a little bit of this, for the channels are informing each other far beyond our expectations and habits. We expand our sensitivities in the imaginal, which adds another layer of information and relationship to how we exchange with our world. The volume of shadow, yielding as a way of encountering the world, the extended understanding of intelligence and crisis as opportunity are all ways of create by changing how we perceive reality.

(A mask is used in printing to block the ink from the plate to the paper. The shape of the mask was from the photograph of the shadows of two people standing together.)

These two diptychs incorporate pieces torn from the earlier prints as way of developing and finessing the image in collaboration with the field.