Archetypes are universal, across all cultures, yet have a deeply personal essence to be explored as we often do not acknowledge, consciously or unconsciously, those with which we are most intimate. These constructions of our basic drives, foibles, and potentialities are core to human behavior. Greek myths offer classical expressions of archetypal behavior, some convoluted and dramatic and some more subtle, all have psychological truth in the context of the human psyche. In marking we are particularly interested in the archetypes that govern us and our culture as they are the currency of all the arts.

In the studio each of us began a practice by acausal means, like picking a Tarot card, to reveal a personal archetype specific for this time to prime synchronicity, assisting to loosen the collective paradigm as we develop a deeper rapport with the relational-field and trust alternate ways of knowing, his is a part of our on-going discussion of the overarching archetypal forest-of-art with its enchantments, perils and opportunities for transformation. We are cultivating what Josh Schrei in his Emerald Podcast on the Forest calls the “protocols or attitudes and procedures for safe passage”. We are learning that these protocols require deep attention, heart investment, commitment, care, love, work and awareness of the web of relations in the animistic universe.

The images accompanying this text may help to illustrate the protocols that developed in the creative process. The first image, a toothy non-descript animal flanked by a young girl shadowed by a red fox, with her hands on the beast’s jaws was an odd painting of several years ago. It was cartoonish and I painted over it several times, once even taking an electric sander to the surface. The icons, however, kept reasserting themselves. 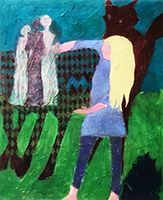 When I pulled the Strength card from the Tarot deck, symbol of inner strength, I realized this image had a message. It was the image of a young woman opening or closing the mouth of a lion. In my image the primal power of the beast seems to be from another dimension. It was transparent and on a different plane, legs dancing above the grass. The figure of the Red Fox is a personal daimon which sneaks into much of my work, extending like the young woman beyond the picture plane. None of this was intentional. Eventually in the last iteration a tri-fold figure was enshrined within the animal revealing itself as the Hierophant, which, according to the Tarot, is the spiritual aspect of the masculine. It emerged from the Beast signifying an intermediator or what I think of as the organizing principle or higher guidance. This was not only important to this image but shed light on several other paintings where this tri-fold image has appeared.

The dynamics of the organizing principle is one of the most important protocols in the forest, for it speaks to a higher principle to which we have allegiance. In an OEITH Podcast by Duncan Barford he refers to the Hierophant via Paul Verhaeghe saying, the difference between power, a two-party relationship, and authority, three parties, is that the Organizing Principle is the representation of goodness and truth and the renunciation of personal power. The Hierophant is not a figure of authority but, rather, a figure that knows where authority is to be found. Through research, reflection and physically marking, this understanding was brought home in a way that was before just conceptual. This process stimulated the important understanding from where inner strength comes. Other experiences in this endeavor confirmed that one of the perils in the forest is the blinders of personal aesthetics which can stop or stall the development of the work in its tracks. Here, we are practicing as not the sole agent but allowing other forces to work, to trust the images that arise and give freedom to become a navigation of the forest. This kind of process leads to a wealth of insights, lending flexibility and curiosity that allows the emergence of what exists. Thus, painting is not a product but a process that belongs to a greater mystery.