#2A & #2B Reciprocity: Coherency and Organizing Principle

In February we are exploring Reciprocity, the exchanging things with others. It is fundamental to the Marking practice and allows us to acknowledge the field as the collaborator in all our markings. We are inviting relationship with an animistic universe. The core of this point of view is contrary to René Descartes philosophy where he maintained that the only exchange is between humans as dualism of two finite substances, mind and matter. Many now in distinct fields like David Abram, ecologist and philosopher, Merlin Sheldrake, microbiologist and writer of history and philosophy of science and Arnold Mindell’s transpersonal psychologist, process therapist and writer for social change disagree with that limited view. Many other fields are expressing that the interconnection with our environment is already in place and instrumental to personal and planetary well-being. Our practice in marking is to perceive an open system where we can exchange energy or material with all life and objects in our environment. 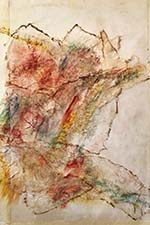 In David Abram’s chapter on reciprocity in Becoming Animal he sets the stage for a different organizing principle where we cannot always apply logic perceiving, as nature is mysteriously interrelated. There are various ways to understand this greater connection. Heart Math Institute Research Director Dr. Rollin Mc Craty speaks of “an energetic alignment and cooperation, to manifest intentions and harmonious outcomes.” Through biofeedback research Heart Math suggests an organizing principle, which brings the brain, mind, body and emotions into balanced alignment and changes our relationship to everything. He calls this state as coherence.

This week for home-reflection we played with the Sun as orientation of directionality. It is metaphor for knowing where we are in a more expansive way than the binary left/right or back/front. We also used the Polyvagal theory as a metaphor. It points out that the vagus nerve running through the autonomic nervous system is the internal control center. It is the orientation of the critical functions of human physiology determining our reactions creating the difference in how our brain receives and responds to information. It is the guide to whether we are centered, connected and feeling safe or go into flight, fight or freeze. The polyvagal exercises help to keep us in that safe center so we can respond appropriately when necessary. It is a metaphor for our planetary sun as the central component of life. It is understandable how the myth narrative of our planetary people points to creation myths of the Sun-God from Egypt, Norse, Hindu, Mayan and the central figure in Christianity of Jesus Christ. 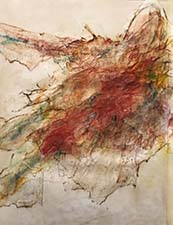 Coherency, although often defined with logical interconnection or sense of understandability has a greater context. An aspect beyond this is the meaning of coherent as closely attached or connected, which is not always logical. The stories by which we make sense of the world, formed by inherited beliefs, are not always congruent with a greater perception, connection and exchange within the biosphere. Sometimes these are not brought to full consciousness until a great tragedy or decision must be faced. These beliefs are most often expressed symbolically in our creation myth. In our work this week we incorporated those myth stories as we explored our relationship with animism and allowed us to expand our reciprocity beyond just the mind matter approach to interactions.