Blog #5D & #6A: Shapeshifting through Trance Induction and Story Telling 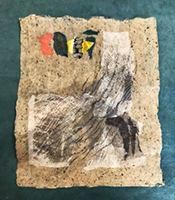 Dream of Fossilized Oyster Found in the Desert

This week we experienced shapeshifting field-trips: Robert guided us to feel into stone-ness, Marjorie had us holding a regret as we ran our finger through water offering a subliminal catalyst for release. Carolyn spoke in the first person as the tumbled rocks and shells of the tide line at the ocean and called forth the details of that rhythm. Lainie brought us through a delightful romp as a chipmunk who dashed and looked, leaped and listened, tasted and stashed gathering nuts and savoring the squirrel’s sunflower seeds.

Lucy, surprised us with her contribution by reaching back to the bard tradition as she brought us into deep participation in her story. She began by having us crawl around on the floor moving as cats, feeling the shoulders and hips initiate the movement of the limbs. She showed a short of the French tightrope walker Philippe Petit as his feet stepped along the steel wire. Then she began the story of his participation in 1987 walking aerially over the Valley of Hell between Palestine and Israel. This dramatic portrayal, 25 meters above the roaring crowd, was an occasion when there seemed to be a possible resolution between the two states. Her presentation included a lively portrayal of a confused white dove released from a piece of silk choosing to instead of fly to freedom land on Philippe’s head then the end of his pole and then walked behind him on the wire, almost mimicking his movements. All of this ended in the dove taking flight as Phillippe reached his destination.

When one actually imaginally embodies other, the experience brings emotions, information and insights very different from thinking about something. It was from this state that we undertook our Marking bringing forward powerful images from all of the journeys.  You can get a sense of that from the markings that appear after this blog.