As we go into shapeshifting in the seminar, In-Bodying the Field in Marking, it is a means to explore the animate-field in which we live. As we change shapes in the imaginal realm we want some navigation tools, like a strong concept of selfhood and an anchoring in the physical body. This week we mark into the centering and grounding of axis mundi, somatically feeling it through gravity’s attraction to the center of the earth. This also gives us a sense of directionality and relationship in the cosmos. Like all our explorations in marking this is not claiming a new belief system but nudging our unquestioned one for a possibly greater perspective and insight into our relationship to life.

Our preparation for the axis mundi marking comprised of somatic exploration with guest facilitator, Carol Agnessens, as well as the evocation of several poets. Participants connected energetically to the feeling of aligning with the world’s axis relating to Emilie Conrad’s comment, founder of Continuum Movement:

It took me many years to recognize that the undulating fluid that I felt in my body…the undulating waves of primordial motion are the movements of love. Not emotional love but an encompassing atmosphere of love. A love that has its own destiny.

If that is a bit of a leap in this great time of stress and polarization perhaps David Whyte’s thoughts from Consolations would relate:

Besieged is how most people feel most of the time: by events, by people, by all the necessities of providing, parenting or participating and even by creative possibilities they have set in motion themselves, and most especially, a success they have achieved through long years of endeavor.

To feel crowded, set upon, blocked by circumstances, in defeat or victory, is not only the daily experience of most human beings in most contemporary societies; it has been an abiding dynamic of individual life since the dawn of human consciousness…

If the world will not go away then the great discipline seems to be the ability to make an identity that can live in the midst of everything without feeling beset…In this space of undoing, and silence we create a foundation from which to re-imagine our day and ourselves…

Creating a state of aloneness in the besieged everyday may be one of the bravest things individual men and women can do for themselves. Nel mezzo, in the midst of everything, as Dante said, to be besieged – but beautifully, because we have made place to stand….

This is the axis mundi that we are cultivating our marking.

Note about painting, Threshold. It is what emerged from the many months of marking pieces. The theme relates to exploration of selfhood, intimate relationship and ancestry which I am beginning to perceive as a plumbline or axis mundi. This piece came together very differently than from how I have been painting most my life. There was no planning or evaluating, but a kind of listening. I found myself using colors I was never drawn to before, like construction orange. It was more of a constant discovery. I was guided to overlay a fine netting and press it into the cold wax and then in several days later to take it leaving a texture. I still do not know where this marking work may lead in relation to artwork, but already it feels like deeper images are arising as collaboration with the field develops.

Exploring Selfhood through marking we incorporated our prints from last week of persona and shadow. We opened with an invocation from Undefended Love by Jett Psaris and Marlen Lyons… 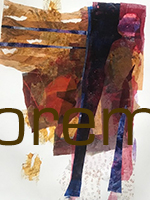 Intimacy—direct, unmediated, heart-to-heart connection with ourselves and with others—can only occur when the heart is undefended. To cut through our personal differences, to reach the unveiled part of ourselves that is deep enough to express the most profound and untamed aspects of our being means learning how to love and be loved without defenses and without obstructions. It means cultivating the capacity to be emotionally present even when we feel exposed or vulnerable; learning to relinquish the many strategies we have employed to feel safe and in control; and finding the courage to love without guarantees or requirements. Through developing the capacity for intimacy in this way, we discover love is an abiding presence in the emotional center of our being, our heart and we can never feel emotionally disconnected, incomplete, or unloved.

Selfhood implies a level of maturity that identifies with a larger sphere. To guide us to this understanding we took the time for conscious breathing over and extended period showing and feeling how the exhale and inhale are distinct yet intimately a part of a whole that does not work without total union. Just as in breathing, selfhood denotes a larger container beyond cultural beliefs, national identity, age and occupation. It includes our character holding all the other selves.

We all explored selfhood in our own way, through sensing, remembering a peak experience that informed the larger self or simply by trusting our marking to reveal something that has been concealed. Most of us worked in the format of triptych which offered a sense of the temporal and/or change in space. In my own work I have found working in a series in the diptych or triptych format, where the pieces inform each other, additional nuances to appear. It is a way of add another ball to those that I juggle which focuses my concentration that often develops content vertically, as well as horizontally. It requires an attitude of reciprocal yielding and loosening of control.

#3D Blog: Aspects of the archetype of artist

The Japanese movie Hokusai’s Daughter conveys how passion and commitment go beyond all social customs and interpersonal needs. Katsushika Oi, the main character in the movie is like many artists- often on the edge of societal norms. This is not just a rebellious or revolutionary reaction but instead arises as an investigative state of being at the boundaries of what is known.

Look at the life of your favorite artists to see their sacrifices. They are visionaries, not in the sense of dramatic tragedy but often in loss that is consciously negotiated. The transfer of energy with the sacred is the meaning of sacrifice. 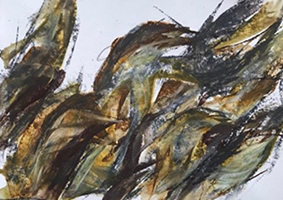 Many artists have lived their lives on an extraordinary edge. Canadian artist, Emily Carr at the turn of the century, tromped through the wilderness to paint Native Americans. Because American artist Alice Neel worked in the era of Abstract Expressionism her paintings were ignored for decades, except by other painters. This year there was a retrospective of her work in New York at the Metropolitan Museum. Mexican artist Frieda Kahlo painted from her physical pain and anguish through a folk art tradition. Japanese artist Katsushika Oi went against all customs established for women as she developed her interest in color. It is interesting to note that sociologically the framing of the sacred trade of artist varies greatly in society’s discussion of different expectations of men and women.  Just look to art history and museums of the world to see the percentage of women. Not being recognized or seen is in itself a tremendous loss for an artist.  But there is something much more valuable that is the impetus for working.

This week in circle we marked combining disparate subjects from imaginal journeys into one piece to experience the possibility of holding dichotomies is a wider embrace. We introduced death and loss, grief and sacrifice as part of this process which we will explore more next week.

The images that follow are from participants in this six-month course. They are not depictions or illustrations but, rather, experiences of the act of doing and feeling. They are a way of resourcing and exploring, as well as, embodying the experience.