In A Time of Story & Poetry

Present to How Thing Are: San Miquel de Allende September 5-12 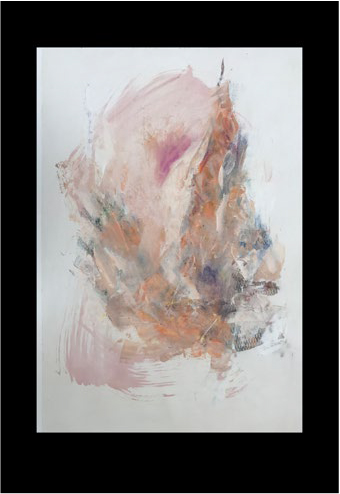 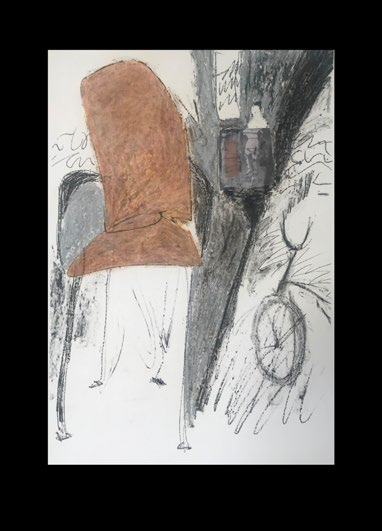 In A Time of Story & Poetry 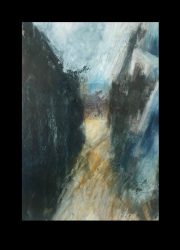 Open Studio Tours is coming up, October 9 & 10. I am showing work like I have never done before, something fresh and unconventional.  And it is not just me in the studio this year, there will be pieces by four Marking Circles participants that will give you an idea of how unusual this process of Wobbling the Paradigm really is.

The approach we are using may be audacious, but that is what is called for in this time. The work is not a product, nor even finished pieces in the usual sense. They are an exploration in the relational-field that is recorded in marks. As a good haiku poem evokes something beyond consensus reality these connect to the mystery. There is a lot of talk about paradigm shift and how it is needed to resolve the problems that we have created. But how well do we recognize that we can’t see beyond our own paradigm? Let alone envisioning what another one might be. We need to mix up old patterns, visualize the world as us, block out the noise and recognize the radical new organizing principle is not something outside of us but rather seeds held within our current paradigms that have, as yet, gone unrecognized.

The approach to marking we have been experimenting with rattles the concept of story. Yes, story is so much a part of who we are and what we do as people. It is our history, our mistakes and growth, and our vision of what can be. But story is often used to cement everything into place, the good, the bad and the ugly as if all of those are defined.  We need to look at story as developing, weaving and undulating, fluid enough for us to embrace possibilities. Science, interestingly, is a good example of this. It is not a steady stream of developing concepts, even though our high school textbooks would have you think so. We have been radically wrong in our presumptions many times. New information arises, old theories fade and new ones overshadow the old. It is the same with child raising and political ideas. The continuum of stories we live by do change fundamentally. While stories, personal and collective will always be with us, at times leaps in consciousness poetry is more of what we need.

Deena Metzner, poet and author, contrasts poem and story, describing a poem as a penetration into the essence of something. A poem expresses the inexpressible adventure deeply. Story and prose, spread out, wanting to speak to the mind, to the intellect. The horizontal gathers information, technique, momentum, while the vertical is outside of time, it changes our life as participant. Jane Hirshfield, Poet Laureate, tell us poetry’s work is the clarification and magnification of being. Poetry creates a vertical experience, an evocative and in-depth exploration.

In the studio, we have been using haiku in our marking as a practice to evoke the not quite articulatable beyond the edge. It points to something we intimately know. We all feel it when a haiku is successful. In that case it doesn’t just tell another story of everyday life or things in nature. It provokes a pause that startles. It suggests a much wider context. And although it is easier to sense in the haiku, it is a different matter to create it.

Stories can be true poetry and much of poetry is really story. What I am interested in is how this translates to the visual arts: visual, literary and performance, and anything in daily life that reaches the stage of art. This was hard to get until these poets helped me to understand and articulate it. Much of our visual arts is story, but we feel it when it moves into poetry. Much of the markings of those participating in Marking from the Relational-Field and Beyond Marking circles edge on that poetic quality.

Come see all this for yourself at the first Open Studios weekend, October 9 & 10 on the westside off Swift, 2593 Mission Street Extension.  After being inspired you can also join in at an introductory workshop, Expanding Sensual Connections Through Mark-Making, being offered on Saturday October 23rd at Anavami Studio on the westside of Santa Cruz and on Zoom. From blogs and newsletters, you have been hearing about Wobbling the Paradigm and, more specifically, Marking Emerging from the Field but it has not been available beyond a small group of participants. So now is the time for you to join in on this new mark-making approach. Explore through mark-making the aliveness and inter-relation of everything around us. We will play with cross-referencing our senses in terms of mark-making with three intentions. One is to extend the way we perceive and translate out relationship to ourselves and environment beyond our everyday habits. Two, is open mark-making, a dialogue with the relational-field, that is the marking materials, physical environment, memories/histories and relationship and to what is most concerning or inspiring in the greater world. And three is to tweak our consensus reality. This last one happens subtly over time, but one session will give you a taste.